In September 2010 Christchurch suffered a 7.3 magnitude Earthquake. This was followed in February 2012 by a 6.3 which was even more destructive. 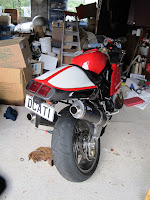 While my house was in one of the less affected areas of town - the Earthquakes wrought terrible destruction. The Superdue fell over in the Feb quake suffering minor damage. The right side fairing and tail fairing were damaged, the RH minor and indicator broke, the frame was dented and the sidestand bent. It must've fallen on that first when it jumped off its race stand. 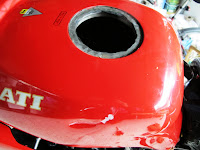 Actually it was amazing it (and my garage) didn't burn to the ground because the bike was on the battery charger that day and, when it fell over, the tank hit the ground, the entire filler cap broke out of the tank and petrol spilled everywhere. I'm sure petrol vapour and live electricity are not a good combination, but it clearly want the bike's time. One of the cylinder heads also got whacked and an an oil leak appeared when I started the bike. Damn.